Something big happened when Dodi Peterson wrote in to BANANAGRAMS™ to ask a question on behalf of her mother, Jan, who was losing her sight to macular degeneration.

“My mom loves Bananagrams and has been playing it daily, for years. Unfortunately, she is losing her vision from macular degeneration. Aside from the ‘Jumbo’ version (which is too big), do you make any other large versions of the game? Thanks!”

Little did Dodi know that her letter would spark the development of a whole new version of the game, raising money for macular degeneration, and an awareness campaign.

When the team at Bananagrams read Dodi’s letter they decided to create something special for Jan – a large print version. The original plan was just to make the one copy for Jan, but as they looked into macular degeneration they realized how many people suffer from vision loss due to macular degeneration or other causes. It became clear that a big letter version of the game should be part of their product line.

Bananagrams worked with vision loss professionals to make sure the size and font of the tiles would be accessible.

Now that the game was developed, the Bananagrams team decided they wanted to do more. They wanted to help raise awareness and support research. That’s when they reached out to AMDF and told us about the new game and their plans.

In addition to donating proceeds from Big Letter Bananagrams to AMDF, they wanted to partner with us to raise awareness about macular degeneration with a fun campaign. We talked with them about how they had developed the game, and once we learned of the effort they had made to ensure the game was accessible to people with low vision, and we tried it out ourselves, of course we were on board! So we went to Rhode Island, home of Bananagrams headquarters, to help them kick off the launch of Big Letter Bananagrams. 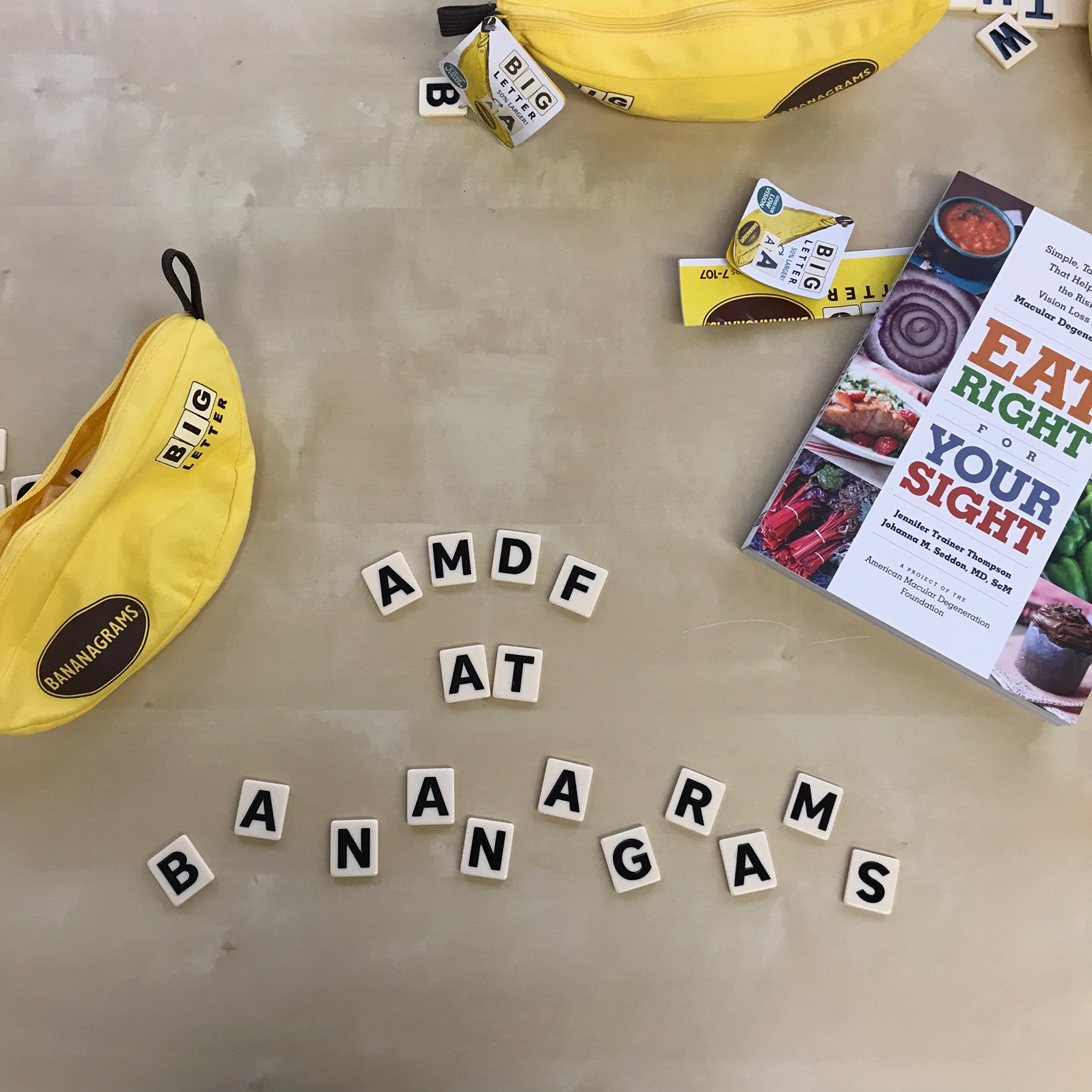 To help kick off the launch of Big Letter Bananagrams, we traveled to Rhode Island, home of Bananagrams headquarters to meet with the team and broadcast a live interview on Facebook.

AMDF’s Matthew Levine (left) sat down with Marketing Director Derek Weston (pictured center), and Design Director Kendra Harrington (pictured on the right), for the live interview. We talked about their visit with Jan, the inspiration behind the game, and bringing her the first copy of Big Letter Bananagrams.

Kendra beamed as she told us, “She beat me at every game, and I was really trying!”

So Much More Than a Game

At AMDF, we were excited about another, invisible benefit of the new game design. Vision loss due to macular degeneration is associated with loss of independence, isolation, depression and cognitive decline. By creating an accessible game that’s both fun and brainy, and creating the Bring Big Smiles campaign, Bananagrams has also created a product that can help ward off some other quality of life declines that some people with AMD experience in a fun way.

Bring Big Smiles (#BringBigSmiles) is the campaign to raise awareness about macular degeneration. The idea is to share the game with someone with age-related macular degeneration (AMD), or if YOU have AMD, to invite others to play with you. Sharing and playing the game with others can help break down isolation, exercise the brain, re-connect families and communities, and, well, put a smile on everyone’s face.

Here are some ideas:

Putting it into Action

When one of our team members, Jennifer, first held a copy of Big Letter Bananagrams in her hands, she knew right away she was going to bring the game to her next family gathering.

She brought a couple copies of the game to her family’s Thanksgiving gathering and left them on a table while she went to help in the kitchen. Twenty or so minutes later she looked over and all the kids were gathered around and already in full swing playing the game.

“I really wanted my grandmother, Mimi, to try out the game. She’s been starting to struggle more with her vision, needing reading glasses and extra light, and she loves activities with her grandchildren and great-grandchildren, so I invited her over. The instructions are so easy that she was able to jump right in. And sure enough she had no problem reading the tiles!” 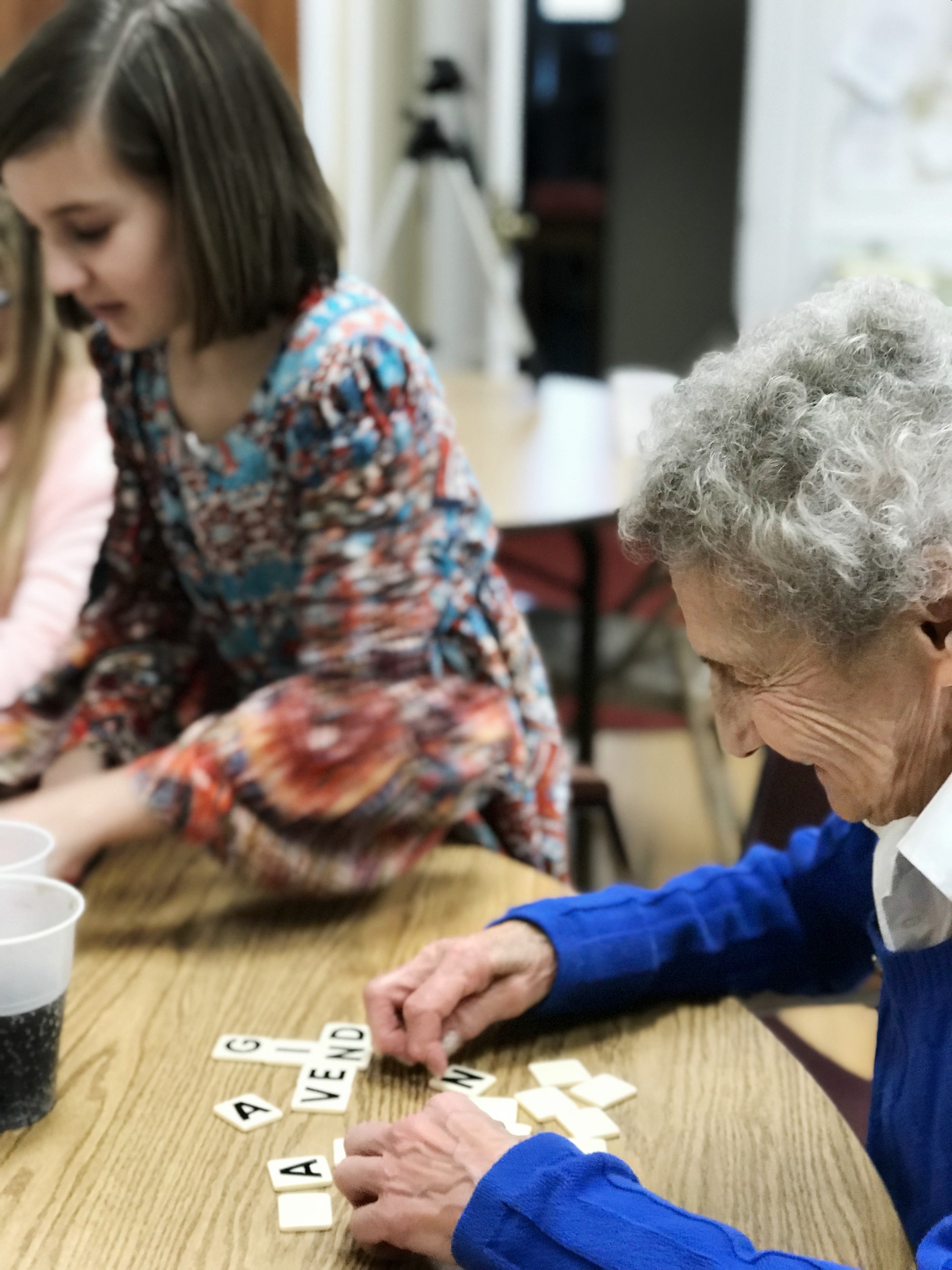 Eleanor got pulled away to help with dessert, but the kids continued to play on. After dessert, Jennifer brought one of the games over to the table where her mother, grandmother, son and Aunt were gathered. After quick instructions, the game was afoot.

“It ended up being my son, myself, Mimi, and my aunt playing, while others hovered over making suggestions. It was a quick-paced game, and other than my son, almost everyone at that table had vision loss of one kind or another, but with the big letter tiles, it didn’t slow anyone down one bit.”

Eleanor won that round, just in time for clean-up.

“Mimi was so tickled to win! I gave her one of the games to take home, and she tells me she even enjoys playing solo, but she’s going to play with a friend who has macular degeneration, and bring it to her community gatherings.”

So what’s Eleanor’s secret to winning a round of Big Letter Bananagrams?

“Well, maybe it’s because I love words! When I was about 10 years old I would read a page of the dictionary when I had time on my hands. But I also quickly discovered that if you make your first word as long as possible, that’s the trick.”

Join the Fun While Raising Awareness 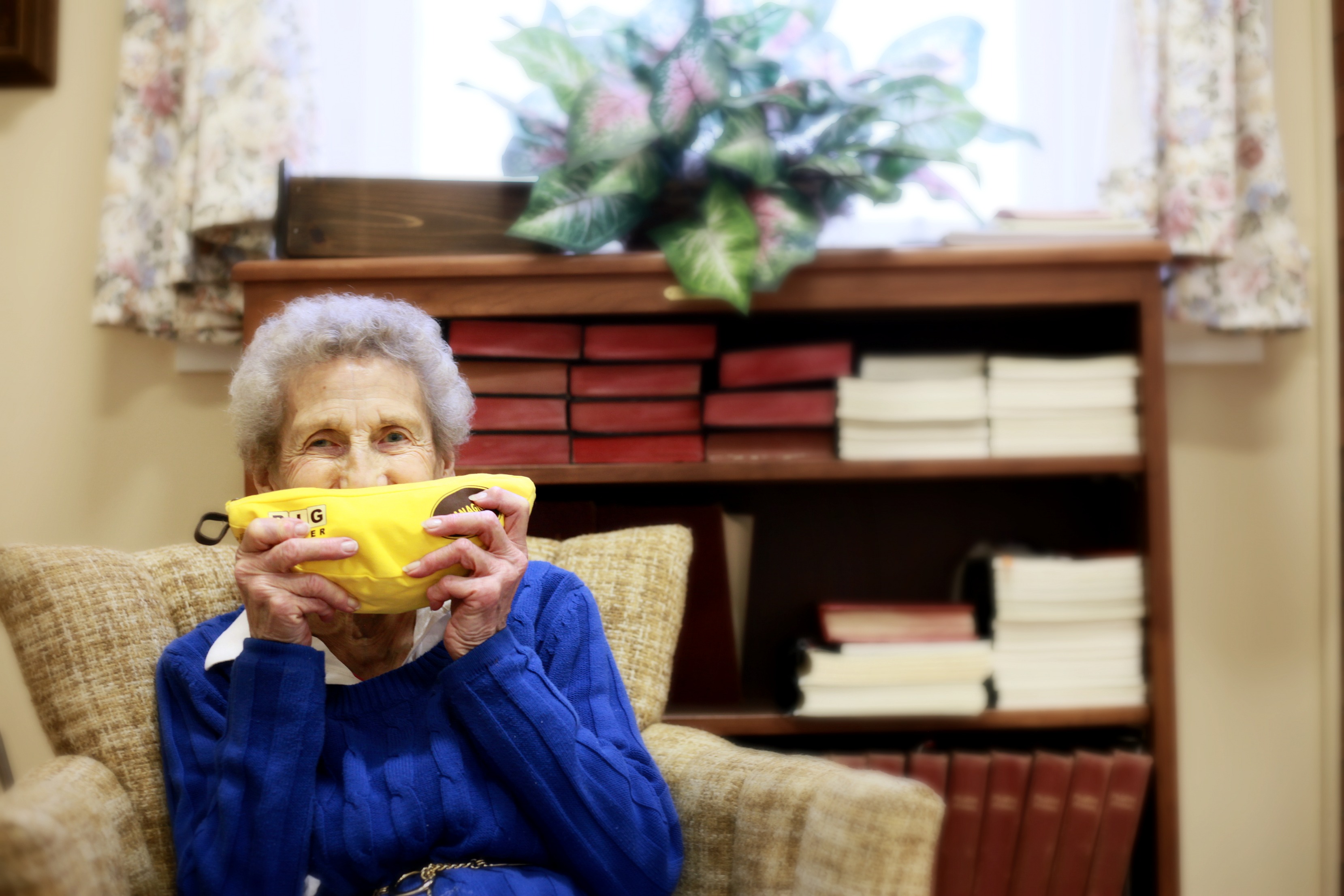 Want to help us raise awareness about macular degeneration through the Bring Big Smiles campaign? Send us your photos and stories of how you’re sharing Big Letter Bananagrams and we’ll share on our Facebook page and/or website.

Send your stories and photos via snail mail at

If you’re on Facebook or other social media, you can post to our page or your own and use the hashtags #BringBigSmiles or #BigLettersBigSmiles.

We look forward to hearing your stories!

7 thoughts on “What Does Bananagrams Have to do With Macular Degeneration?”